1989 - Victorian Fan Tree Skirt - and My First Pieces of Tatting 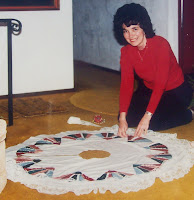 Working on the tree skirt between Aug. and Dec. 1989

I hesitate to bring up Christmas at this time, but the Victorian Fan tree skirt shown in this post has great significance to my tatting story, as it has my first pieces of tatting on it!

In 1989 Victorian items and Victorian home decorations were making a ‘comeback’ and were featured in magazines everywhere. Victorian tea shops were springing up here and there; and ‘quaint’ Victorian customs and manners were wistfully remembered.

I was especially pleased that lace was once again being admired and appreciated. Doilies and lace-edged handkerchiefs were coming out of hiding! I had done a fair amount of crocheting over the years (although much more knitting) and had made a few doilies; and in 1989 I was making crocheted Christmas ornaments in various shapes (bells, parasols and, of course, snowflakes). Three-dimensional crochet patterns were readily available, and stores were even beginning to sell finished and ‘stiffened’ 3-D crocheted ornaments, in addition to snowflakes. Christmas trees were being decorated in Victorian style with beads, feathers and lace - without the lighted candles, of course!
Quilt classes - In the summer of 1989 I was taking quilting classes at a local quilt shop, where I first saw a model of this lovely ‘Victorian’ tree skirt displayed on a wall. I loved the colors (shades of burgundy and green – sound familiar?). So, even though I was a ‘fledgling quilter’ I signed up for the class. My diary indicates that I started the class on August 27 – that’s 19 years ago, almost to the day. I remember picking out the material and also going to a fabric store to find the wide commercial lace to go around the perimeter.

My husband and I had celebrated our Silver wedding anniversary the previous January (we married in 1964 – I was almost 20 and he was 21), and I hoped to finish the tree skirt in time to commemorate our 25th Christmas. (Can it be possible we’re now about to celebrate our 45th anniversary !!) As an extra touch, I added silver beads to each fan section 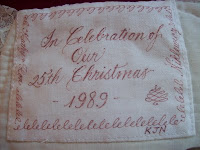 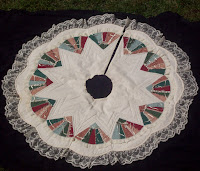 Finished tree skirt and label attached on back

July 1989 - A trip to Maryland, and a Big Surprise
Before I started the quilt class, however, in July of ‘89 my husband and I traveled to Maryland to visit a craft fair. I must have seen an ad about it in a magazine. I loved going to these craft fairs. They were becoming more and more numerous ever since the Bicentennial celebration here in the United States (in 1976) which seemed to inspire an appreciation for hand-made quality items such as those made in times gone by. Folks at these fairs were demonstrating their crafts, and they were usually dressed in period costumes. I enjoyed talking with everyone, as I’m interested in crafts of all kinds.

This was a rather rustic setting in the Maryland woods, so I was totally astounded to find a tatting booth there, as I hadn’t expected it; and it was the first time I had seen anyone actually tatting! I talked to one of the gals in the booth (her friend was out having lunch) and I was dazzled by the beautiful things I was seeing, especially a delicate, tatted lace purse, which I believe had beading on it. She tried to show me how she was tatting, with a very fine thread. It looked very complicated to me, but I was mesmerized!!


That trip to Maryland changed my life! All the way home I kept thinking about the beautiful tatted lace I had seen. I decided to pursue tatting again (a goal from back in 1956 when I was 12 – subject of a future post), and I this time I was determined to learn! Little did I know that a year later, I would not only learn to tat but would also be demonstrating tatting to others - and dressing in costume!

The “Tatsy” shuttle. Shortly after returning home from Maryland, I found a tatting shuttle at a craft store called a “Tatsy”. I already had a silver “Boye” shuttle (which I purchased back in the 1950s), but I had never seen such a large (plastic) shuttle! However, I thought it would be easy to handle, and I could put thicker thread on it, so I could see what I was doing. That is, if I could ever figure out how to tat!

There is much more to this story which I will save for another post. I’ll be giving credit to the local tatter I met by chance a few weeks after I purchased the Tatsy shuttle, and who helped unlock the mysteries of tatting for me and who, importantly, led me to another ‘tatting lady’ who had a profound influence on my life.


My husband remembers that all he heard for several weeks was the ‘click, click, clicking’ of me winding and unwinding thread on that shuttle! And he still hears it today, as it’s the shuttle that I use to demonstrate tatting!

According to my 1989 diary, I finally learned to join rings on October 7th. after which I tatted a short length of joined rings (no chains yet). Then, most significantly, I tatted a short length of “hens and chicks” (although I didn’t know its name at the time) – my first attempt at following a pattern. I was so proud of these pieces, and I made sure I added them to my tree skirt as a remembrance of my first successful pieces of tatting!


And finally, here are those first pieces of tatting: 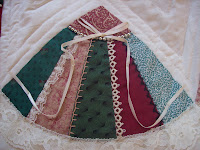 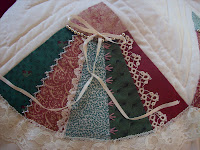 As you can see, I hadn't quite mastered the 'distance thing' in Hens and Chicks!

Moving Ahead to 1996, after Six Years of Tatting and Demonstrating
When I first used the tree skirt at home, I had it lying flat under our tall Christmas tree. It looked nice, but it wasn’t particularly impressive there, and you had to make sure you didn’t walk on it!

After I joined the tatting group (in 1990), I started to display the tree skirt at our tatting demos, usually by just draping it across the table, sometimes with a small tree nearby, decorated with a few tatted ornaments. It got many favorable comments, but still wasn’t quite the effect I wanted.

Then, finally, in 1996, I purchased a small, 4-foot tree, just the right size to take to the festivals. I also purchased one of those three-legged circular tables, over which I draped a burgundy or green circular cloth, and placed the tree skirt on top of that, the way it was meant to be seen. When I added the new tree, filled with samples of my six years of tatting, I finally had the perfect combination of Victorian Christmas tree and Victorian tree skirt!

1996 - Tree and skirt together at last !
Of course, I’m very proud of the fact that I designed many of the ornaments, and in my future posts I’ll be showing them as my Motifs, where I’ll explain how they evolved.
I’ve added a few more items since then, and changed things around a little, but the tree looks basically the same, and it goes with me to all the festivals.
In my next post I’ll take you back to 1955, and my first awareness of tatting, and I’ll also give proper credit to the two women who taught me to tat.

I’ll also be posting the first of my Motifs :-)

Hope you enjoyed the above l-o-n-g story! Signing off for now!!

Posted by Kathy Niklewicz at 8:55 AM 5 comments:

Victorian Doll - new uses for doilies and bits of tatting

Although I want to keep things in chronological order, starting with 1989, I’m jumping time-wise to about 1995 because I promised to explain the Victorian Doll pictured at the top of my blog.

I bought the doll (without the tatted ‘apron’, of course) in the mid-1990s at a toy store. I particularly liked the colors of her dress – burgundy and green – very Victorian!. I knew I was going to embellish the dress with tatting, and it happened that I had started a doily a few months before I bought her. I was tatting the doily to see if I had the discipline to pay attention to the important joins necessary with each motif. It turned out I didn’t quite have the patience to make the doily any bigger, so I have only 20 motifs in the doily, and I put it aside in my ‘unfinished tatting’ stash.

The doily turned out to be the perfect size for the skirt overlay on the doll’s dress. However, as you can see, the doily does not cover the back of the skirt, so I added another piece of ‘scrap’ tatting on the back, as well as to the top front of the dress. Yet another piece of scrap tatting is used for the headdress, finished off with a wisp of a marabou feather.

She’s just a sort of ‘fantasy’ doll, not from any particular time period, but she nicely complements my Victorian tatting display.

Now for the embarrassing part - I have searched high and low and can’t find the pattern for the doily! Possibly the pattern (I believe it is in a booklet of patterns) is hidden away somewhere in my craft room, and I will come across it one day. However, I generally keep all my tatting books together, so I can’t imagine where it could have gone. If you know where this pattern can be found, please let me know!

The message of this post is: Find uses for old or new doilies! You can frame them, of course, or mount them on throw pillows. Smaller ones (coaster size) can be medallions on towels or pillowcases or can be showcased on top of fancy velvet boxes.
As this is my first post with photos actually in the post itself, I'm going to close here and see how it worked out. I'll be adding another new post soon..