Plus photo of 111-year-old Christening gown, mentioned in my St. Patrick’s Day post.

* * *
In the United States, three Patriotic holidays are coming up (Memorial Day, Flag Day, and Fourth of July), so I’m sharing two versions of a Celtic motif designed by Sue Hanson in 1999, which appeared on the Internet. Here I incorporated the colors red, white and blue, all DMC perle cotton, size 8.

Back around 2000, I apparently was surfing the Net at the library and was able to print out Sue Hanson’s 5-point Celtic Motif, which she did in two colors. The easiest way to see Sue’s basic pattern is to Google “Sue Hanson’s Tatting Patterns”. There’s a nice chart which lists several of her clever patterns, including this one. Her heart pattern is also very attractive.

I believe I independently came up with the idea of attaching (sewing) the motif to a tri-colored ribbon. (The pin backing is also sewn on.) 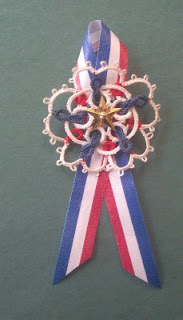 I used red white and blue for the colors in the 3-section motif.

I changed the 3rd (outer) section to have longer chains to include three picots in each chain, rather than two. Adding the longer chain definitely gives the motif a different look.

I sewed a brass star (from scrapbooking supplies) in the middle, and added a tiny gold bead through the center hole in the star. 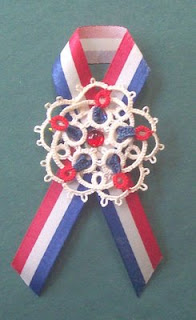 A slight change to the colors also gives a different look to this motif from the one above.

I glued a red gem to the center of this motif.

These holidays mean that summer is finally on the way (although I don’t want to ‘rush’ it, and I will savor every moment). This week we have been blessed by the most fantastic weather! My mood has improved considerably, and the back yard is a wonderful place for contemplation and admiration of nature. Lots of birds and rabbits, and occasionally some deer. I’d love to have a butterfly garden, but haven’t been successful in planting one so far.
Christening gown made in 1898 ! 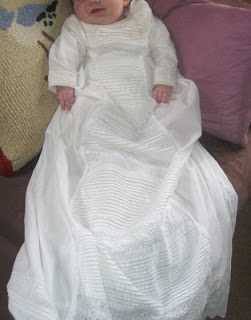 In my St. Patrick’s Day post, I mentioned my grandparents, whose parents (English and Irish, although they all lived in Ireland) emigrated to America between 1850 and 1870. My English grandfather had tailoring skills, and in 1898 for his firstborn child (my uncle ) he made a Christening gown, which is still in the family and has been worn by my uncle’s children, his grandchildren and great-grandchildren. And now it’s been worn by my uncle’s great-great granddaughter. Here is a very recent photo of the gown, which looks new! Lots of pin-tucks and some nice wide eyelet-type 'lace' for insertions, the hem and sleeves. I believe my mother (b. 1907) also wore the gown as did two other uncles. Fortunately, it has been lovingly stored and cherished down through the generations

Interestingly, it was my grandfather, not grandmother, who did the sewing in the family, and had a laundry business – very important to the community back in the early 1900s. Unfortunately, I never met him, as he died in 1929. I remember my mother saying how her father helped her with her 'school' embroidery projects, of which she did only a few, so I’m delighted to have four napkins she embroidered. She did not have an interest in needle arts, but was a great cook, which, unfortunately, did not ‘rub off’ on me! :-(
My mother graduated from a ‘big city’ school (Springfield, Mass.) in 1924 and went to “Normal” school for two years (now Westfield State Teachers College); then she taught in a one-room schoolhouse in Vermont for six months. (1926-27). I have photos of her standing in front of that schoolhouse (wood siding - no longer there), and actually saw (in 1993) the home where she boarded. She mentioned how she had to start the potbelly stove – like ‘Little House on the Prairie”! The location of the small Vermont town is not far from Arlington, VT, where Norman Rockwell set up a studio in the 1930s, although that was several years after her teaching stint. However, she may have taught some of the children who later became his ‘models’.
Looking forward to picnics, trips to lakes, and nice summer weather!
Posted by Kathy Niklewicz at 9:15 AM 6 comments:

While Strolling Through the Park One Day, in the Merry Merry Month of May ... 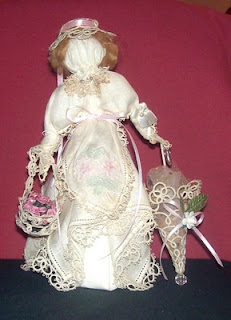 Motif #19 – Edging Used on Victorian Handkerchief Doll, Hat and 3-D Parasol.
(Edging # 8834 from the Tatters Treasure Chest – Dover Publications)
In honor of Month of May, and also Mother’s Day, I’m showing my Victorian ‘handkerchief’ doll, which I created back in 1992, after I saw a McCall’s pattern for making dinner napkins into Victorian dolls
I thought the idea would also work with handkerchiefs which otherwise would be stored out of sight in linen closets
Of course, two handkerchiefs with tatted edging are ideal!
The two handkerchiefs used for the doll can be completely ‘untied’ and used again as handkerchiefs. No sewing or cutting is involved. As I recall, I used size 30 DMC ecru thread for the tatting.
I’m going on memory here, as far as the instructions. The basic idea is to take a Styrofoam cone and cover it with plain fabric, providing an underskirt. A thin dowel rod is stuck into the top of the cone so that the upper body and head are supported
The lower handkerchief (put on first) is draped over the cone, showing off the tatted lace to best advantage.
The upper handkerchief forms the head, sleeves and upper ‘apron’. This particular handkerchief has a simple chain edging, and an appliqué in one corner, which becomes the ‘apron’ of the skirt. The head is formed over some cotton batting, and a ribbon is tied at the neck. She also has a piece of scrap tatting for a ‘collar’. The puffy sleeves also have quilt batting, and the ends are tied in a knot to form ‘hands’. The handkerchief is also tied with a ribbon at the ‘waist’ 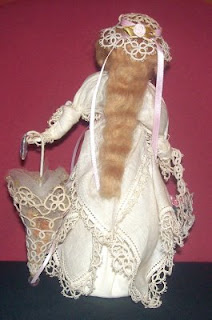 Here is a the back of the doll. Her hair is ‘tacked’ onto the top of her head with some small stitches. and her hat is a very small doily stiffened into a hat shape, using the same lace edging as that on the lower handkerchief
The parasol is basically rings and chains and is topped with the same lace used on the bottom handkerchief and hat.
I’ll feature the parasol on another post
The basket is from Rebecca Jones’ book, and I’ll also feature it on another post
She’s sure carrying a lot of stuff !!!

Imagine what you could do with all those handkerchiefs stored hidden away. The dolls would make great gifts and wonderful curio keepsakes
Here’s some information about the song
You can check the website www.geocities.com/holidaysfun/strollpark.html to hear this melody and see the lyrics. You might even do a little “soft shoe” tap dance!
Younger folks may not be aware of this quaint 1880’s Victorian parlor song (although the original title was “The Fountain in the Park”) , as that kind of music (sadly) doesn’t seem to be popular anymore. This is one of those ditties which remained a staple in most barbershop quartet repertoires and in family sing-alongs
Because of my interest in Victorian things and in playing music, I find it to be a charming reminder of a more ‘innocent’ time, when “June, croon, tune, honeymoon and spoon” were popular rhyming words
Although the author of the song is listed as “Ed Haley”, further research on the amazing web indicates that the actual writer of the song is a fellow named Robert Keiser (1862-1932) , also known as Robert King. For whatever reason, he wrote music under several different pseudonyms, even using women’s names! Ohio’s theme song “Beautiful Ohio”, was published under the name “Mary Earl” but the writer was actually Robert Keiser/King again. (Go figure!)
I hope you all have a Happy Mother’s Day! Although I’m not a mother myself, I’ve enjoyed my role as “Aunt Kathy” to several nieces and nephews, ranging in age from 48 to 18. However, being an aunt is definitely easier than being a mother! My hat is off to all of you who have children! You deserve to have a special day! I’ll fondly be remembering my own wonderful mother, and other older women in my life who were mentors and friends, especially those who shared my love of needlecrafts.
Posted by Kathy Niklewicz at 9:34 PM 7 comments: