The 'Jelly Bean' Tulip and the Magic Triangle 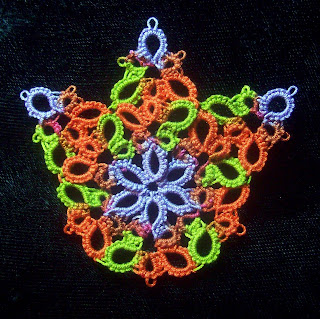 together, specifically using Size 20 Lizbeth 'Jelly Bean' thread
This is one of those optical illusions where you can't really tell that this
tulip is actually created with little triangles; and in this case, the colors

were very much controlled, almost giving the impression that I started this tulip 'motif' with six purple rings, but those are really the 'tips' of six triangles. I'll explain below how that 'color control' came about - quite by accident!
I must give credit to Sue from Michigan, who last October posted about her experiments in creating fabric 'shapes' by connecting the little vintage triangles edge to edge, rather than point to point. Jane Eborall has done something similar in the past, using a diamond shape, and has recently posted about a similar new project!

Links to Sue's posts are here:

The little triangle itself is a vintage pattern from long ago. This past January, Gina (Tatting Goddess) wrote several in-depth posts about them, starting with this post.
http://threadsofatattinggoddess.blogspot.com/2011/01/2-in-25-motif-challenge.html

As mentioned above, usually the triangles are joined at their tips, which then creates triangle-shaped 'open spaces'. 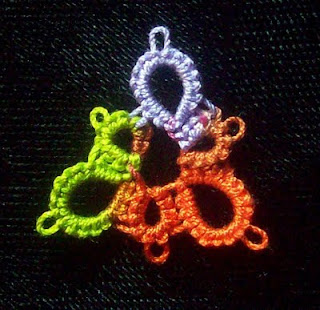 This is the basic triangle,
except I have added a picot on
all the small rings to more tightly
join the triangles together.

The fact that each tip in this triangle is a different color happened by chance, as explained below. 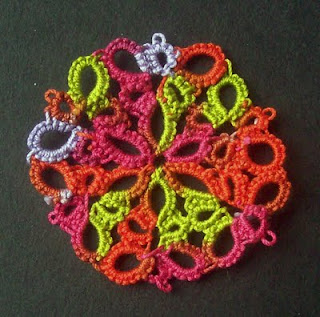 When I first began tatting and connecting the triangles, I wound Jelly Bean thread on the shuttle, and started making a ring, without any thought to the color coming off the shuttle.

With each triangle I started the first ring with whatever color was 'next'. After joining the six triangles as I tatted them, I ended up with the above interesting circle. (I might add that tatting the triangles gives one a lot of practice with the 'no-twist join' on the last ring of each triangle, and especially on the last triangle! And, of course, there are ends to hide.) 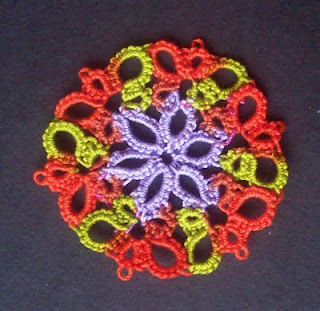 When I began to tat a second circle, I just happened to start the first triangle with the purple thread.  And as I tatted, it amazed me that the next large ring was orange, and the last, green.

I wondered if that would happen consistently, and it did, by starting with the purple thread. (Doing this eliminates the reddish color thread.)

Then I wondered what the circle would look like if I attached the triangles with all the purple rings in the center. (I actually drew it in color on the computer first!)
It looked cool on the drawing, with the purple center. Then I added more triangles on the drawing, to form a six-pointed star, and I determined that the tips of the star would be purple also.
But after tatting three points, a tulip shape emerged, and i decided to stop there!
I have no idea if every ball of size 20 Jelly Bean will create this same result. (And the other question is whether it would work with size 40 and 80.) Because Lizbeth threads are commercially manufactured, I assume they all have the same pre-programmed lengths of color, but I may be wrong! On this particular size 20 ball. I'm so pleased it worked out this way
Finding a Frame! 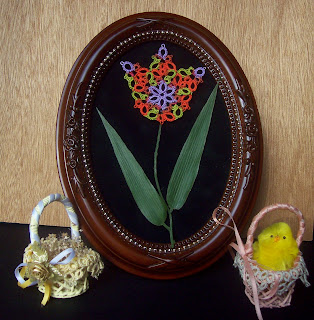 It's taken me awhile to find the right frame to showcase the tulip, and I finally found one this past weekend. Fortunately, it was on sale at Jo-Ann Fabrics. I wish I had had it in time for the Maple Festival, but I 'll have opportunities to display it at Vicary House and Old Economy.
The frame has a 5 x 7 oval opening, and is 8-12" tall and 6-12" wide Of course, I added my black velvet paper as the background. The frame can be hung on a wall or used as a standing frame. That's what makes these kinds of frames worth the cost.
I added some 'bling' to the frame by adding the gold beads to the inner area of the frame. (The beads come connected together on thin adhesive strips).
At some point I might add tatted leaves, but for now these leaves (clipped from a large plant in the house!) are substituting.
This is what I love about tatting - the variety of things you can create with it!!
*  *  *
In my next post, (before Easter?) I will show my coffee table, which is covered with my egg displays - mostly of the tatted variety, but a few others as well.

HAPPY TATTING DAY EVERYONE !
I spent Tatting Day setting up with our group for the Maple Festival, which is this weekend.  The following photos are from 2009 and 2010, but they give an overview of the way the Festival is  set up.  It's much larger than what I'm showing here.  There are usually Civil War re-enactors and also a petting zoo for the kids.
Below is the view of the Lodge (from the vicinity of the main road but far away from the parking area) where everyone will eat their pancakes, sausages, and, of course, Maple Syrup!  The line forms to the left of the building, under a protective canopy, and extends down to where the buses leave everyone off (in the distance).    In the front of the photo is the creek, which was starting to overflow the small concrete bridge due to heavy rains the week before (in 2009).  We drive over this bridge to set up, but have to park where the vistors park during the Festival.  Our pavilion is hidden in this photo by the  Lodge,  It's up the hill a bit from where the folks are lined up. 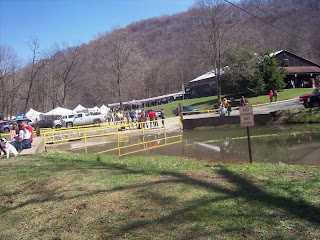 Below is a closer view of the folks all lining up.  They start at 8 a.m, and it pretty much stays like this the entire day!  The Lodge can hold 600 folks at a time!  It's buffet style, with the Boy Scouts and other volunteers coming by to give you more pancakes and sausage - as many you want! 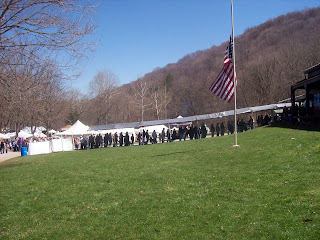 In the next photo you can see more of the vendors' booths along the 'main' path. 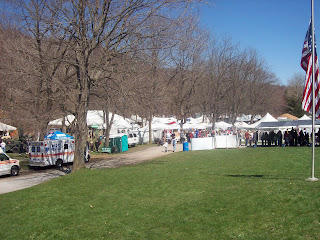 And here is our pavilion, all protected with plastic panels!  We share this pavilion with  Bobbin Lacers,  Quilters, Cane Chair weavers, and a gal who does German paper cutting.
The local History group also has a table. 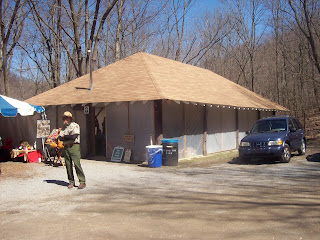 Below are photos from inside of our pavilion (in 2010)﻿
First is a closeup of part of my table, where I brought along Janette Baker's DVD and book, to show everyone how much easier it is to learn to tat these days.  Of course, I also tell them about the internet and the free videos there.  I explain blogging to them, and it amazes them to learn that we are all able to communicate with each other almost instantly from around the world.  I emphasize that tatting is no longer a 'dying art'!! 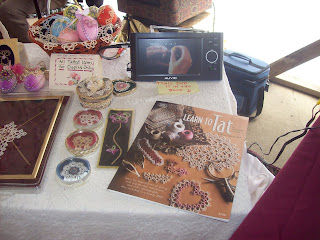 Below is more of my display - my Christmas tree with Victorian Fan Tree Skirt, and the Victorian Doll House.  I love to take photos of the little ones peering inside the doll house! 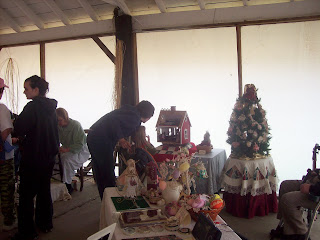 And below is a view looking toward the entrance door, with the bobbin lacers on the right and the quilters on the left (both kind of hidden).   Evelyn (83 at the time) is demo-ing to some visitors, and Peg (Carol Lawecki's Mom) is busy tatting away. 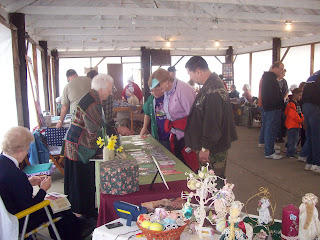 As it is now almost 9 p.m, I must get going to continue getting ready for tomorrow!
Costume, books, more tatted items to take, etc.  The weather is 'iffy' tomorrow, with rain forecast;  but it may clear up on Sunday.  (Believe me, the weather does not keep the visitors away!)  The temperature may make it up to 50 degrees on Sunday, if we're lucky!
Hope you all had a great day tatting - and, oh yes - eating CHOCOLATE!!!
Posted by Kathy Niklewicz at 5:53 PM 7 comments: