Motif #1: The Versatile Hens and Chicks - plus Back to the 1950s and Unsolved Mysteries

This is the beginning of my motifs for the Challenge, which will also be a retrospective of my tatting journey. I’ve been distracted a bit from working on my blog due to the happy circumstance of my husband’s recent retirement, which has finally given us the opportunity to take some day trips here and there and to enjoy outdoor activities, and also to catch up on lists of things to do around the house. It’s a little unsettling to realize we’re actually at this stage in life, but we feel lucky to experience a more leisurely pace, with no alarm clocks! I’ve also been reorganizing my tatting books, photos, and display cabinet, not to mention reading my diaries from 20 years ago, which brings back all kinds of memories and emotions.

Before I begin, I wish to thank Tattycat, Wickedtats, Clyde and Jeff for assisting Sharon and giving her a well deserved break from having to constantly monitor the Challenge blogs. I’ve often wondered how Sharon could possibly keep up with all the blogs. We’re all indebted to Sharon for creating her important, popular and educational tatting site. The assistance of the above-mentioned tatters is most appreciated!
MOTIF #1

Wow! This is really getting back to basics!
I must give Hens and Chicks an honored spot in my blog as my 1st Motif. Hens and Chicks is one of the most recognizable and basic ‘one shuttle’ tatting patterns. It also is one of the few ‘antique’ patterns that has a name, although I have no idea who named it or when that name first appeared in print, let alone when the pattern itself first appeared. I’m sure someone out there knows the answer! One of my ‘Unsolved Mysteries’.

In the “Antique Pattern Library” website http://www.antiquepatternlibrary.org/completelist.htm there is an 1861 booklet called Tatting and Edging Insertions, which contains a lovely pattern called Etruscan Border. Could that pattern be the forerunner of today’s Hen’s and Chicks? The booklet is the last one listed under “Riego, de la Branchardiere.” See page 11/16.

I quickly tatted the 1861 Etruscan Border (so quickly I left out one picot on the last large ring and had to 'fudge' to attach the joining ring!) to show you how amazingly it resembles Hens and Chicks!

Childhood Memories – Back to the ‘50s and beyond
Not only was Hens and Chicks the first ‘pattern’ I did on my tree skirt in 1989 (see prior post), but it was the edging on the mysterious ‘triangle’ linens displayed in my mother’s china closet (dating back to 1937) – See photo below. As far back as I can remember, these triangles (originally there were six) were prominently displayed in the china closet and gave me my first ‘awareness’ of tatting. I remember that I enjoyed looking at them and I wondered how they were made. 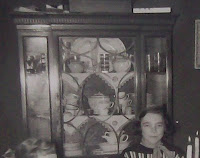 My 12th birthday party - 1956
and the Mysterious Tatted Triangles
I was in 7th grade when the above picture was taken, and I seem to be enjoying my party! The photo is significant for me because this is how old I was when I began my needlework adventures of knitting and crocheting, and also began learning to sew on a brand new machine purchased for me by my wonderful parents due to my interest in my ‘home ec’ sewing classes at school. It was also at this time that I was frustrated in my efforts to learn to tat! More about that in my future posts! 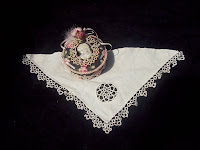 One of three surviving linen triangles from 1930s or 1940s
I don’t know exactly when or how my mother acquired the linen triangles, but I don’t believe they were made by anyone she knew. I’m sure she would have told me! No one in our family tatted, so I’m guessing she purchased them for herself (or someone purchased them for her as a gift) back in the ‘30s or ‘40s. (I have a photo from the ‘40s showing them in the china closet.)
I assume it was possible to find such items in stores back then.

I somehow always knew that they were tatted - my mother must have told me. Even though my mother did no needlework herself (except maintenance sewing by hand), she was probably familiar with the look of tatting, as it was very popular in the 1920s and 1930s.

In 1962, my parents gave away their dining room furniture when we moved to a new apartment, which had a larger kitchen but no dining room. I myself was starting my ‘career’ as a secretary (age 18) and was concerned with other things, especially dating my boyfriend, Ron (now my husband of almost 45 years!). I paid little attention to anything else, and I gave no thought to the ‘missing’ dining room set and the linen triangles.

My husband and I were married in January of 1964, and our first apartment was only 10 miles from my parents, so we visited often. Very sadly, however, in 1973, shortly after my husband and I achieved our goal of finding the lot on which we would build our house, my mother died after a six-year illness, and the next year, my father also died. They were only in their mid-60’s, and it’s still difficult for me to think about that time.

When I went through their possessions, and acquired my mother’s hope chest, imagine my surprise to find these triangles among her linens! What a flood of memories they evoked!!! They must have had a special significance to her.

However, I was puzzled as to the poor condition of the tatting on the triangles. I can only guess that the other three triangles were even more damaged and she had to discard them. The triangles appear to be in good shape in the 1956 photo, so the damage occurred after that time. (The circle medallions are OK, however.) Could it be that the triangles were washed in the washing machine, and the agitation of the machine damaged them? (Another Unsolved Mystery) The thread size is ‘thicker’ and appears to be #20 or #10.

The three triangles now decorate my own ‘tatting cabinet’ (a small china closet in my craft room), and I’ve thought about trying to ‘fix’ the tatting, but it’s remained just a thought!

Below are different ways I’ve used Hens and Chicks in more recent times: 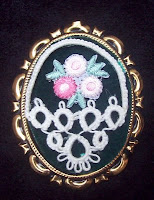 Pin or Pendant.
- purchased metal backing at craft store
- cut oval from velvet paper and glued in middle of pendant
- added a chain to Hens and Chicks motif to form 'handle'
- glued 'basket' to velvet paper
- glued commerically embroidered flowers above basket
- used jewelers' glue to add pin on back 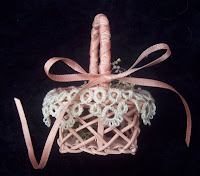 I found these wood baskets, in different colors, in a craft store. They are only about 2" across and 3" tall. I added Hens and Chicks around the edge, and put flowers or baby's breath in the basket.

What more appropriate place to put Hens and Chicks than on an egg! This egg is actually a white flocked egg (over hollow plastic), so it is fuzzy to the touch. The eggs also came in pastel colors, and I added different motifs to them for my Easter display.
The thread I used here was DMC's metallic gold, which comes on a spool and is usually found in the cross-stitch area of craft shops. It is equivalent to size 30 and is excellent to work with. In this instance, I glued the tatting to the egg. (This pattern is very easy to do, and I shaped it to fit the egg. It's the same pattern I use for my 3-D eggs, to be explained later.) 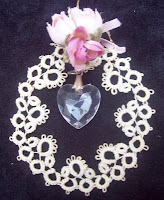 Here's a Victorian sun catcher or tree ornament made with Hens and Chicks, which can be easily formed into a circle. In the center is a 'heart' acrylic pendant. Initially I used real crystals, but the acrylic ones are lighter in weight and much less expensive! You can put anything you wish in the center, or just leave it open! 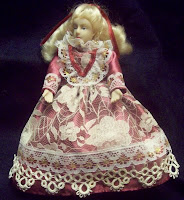 This 6" gal graces my Victorian Doll House, which I take to my demos. I knew I was going to put Hens and Chicks on the bottom of her skirt when I purchased her. 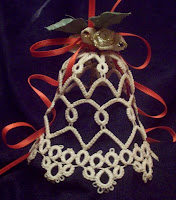 As you can see, Hens and Chicks is indeed an attractive, versatile and 'classic' tatted lace pattern!
Posted by Kathy Niklewicz at 11:50 AM 4 comments: