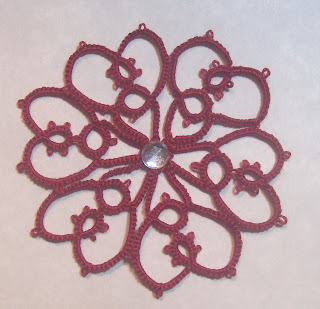 Motif #8 - Second Round
Lyn Mortons “Hearts and Flowers”
I was recently searching for books written by Mary Konior, and I came across Lyn Morton’s “Tatting and Designs” website, which has this free pattern in it. It is also in her “Tatting Patterns” book from 1993.

This is 3” in diameter,
DMC perle cotton, size 8, #498
Lyn’s pattern can be found at http://www.tatting.co.uk/pattern.htm 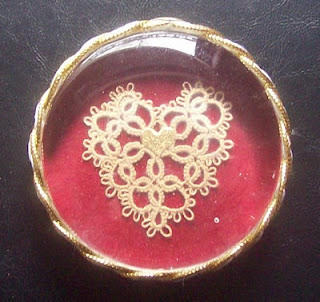 
Next are pins I wear on my costumes. They are called “Strawberries” in the Workbasket magazine, but they make a nice ‘heart’ shape, too 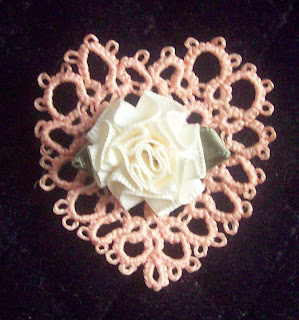 Motif #10a - Second Round
Coral pin 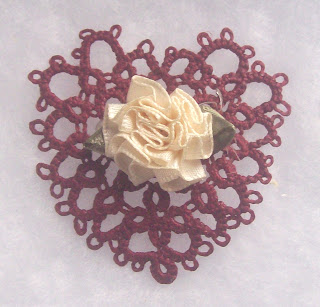 
The next two motifs are on my ‘crazy quilt’ Victorian Christmas stocking (shown on my Dec. 24, 2008 post). I finally found the sources of these two patterns. 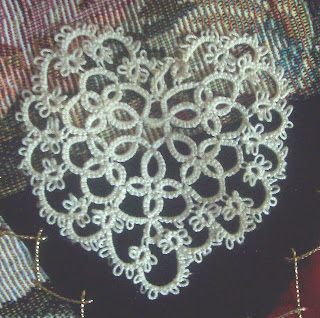 Related to gold heart above,
from the same magazine
Possibly size 30 thread 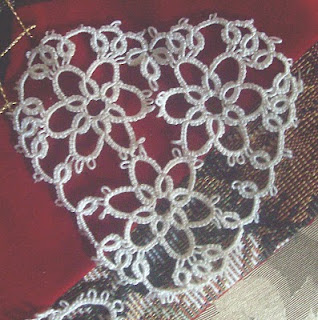 I finally found the ‘source’ of this pattern, but not the designer (see below)

There is supposed to be one more ring on the outer round, left side, to match the one on the right side.

The above motif is an example of a heart shape made from three motifs which form a triangle, then an outer round that connects them together.

1994 Quilt Show - Inspiration for Motif #12
When I posted my Victorian Christmas stocking a whole year ago, I could not remember where I saw this pattern. Then it dawned on me that I saw it on a quilt at a Quilt Show around 1994 (can’t believe that’s 16 years ago!).

I also recalled that I made an attempt to ‘copy’ the heart from a somewhat blurry photo I took of the quilt square. I finally found that photo AND one of the entire quilt, plus some other squares. Those photos reminded me that the quilt had a LOT of tatting on it, which amazed me! The quilt (mostly appliqued motifs) had 49 squares, all different, and most of the squares had tatting in them!

Yet the card that accompanied the quilt made no mention of the tatting or the tatter! Unfortunately, the quilter was not at the show that day, so I couldn’t ask her about it. If she also did the tatting, she did an excellent job, as it has free-form tatting as well as delicate edgings and tatted motifs, done in fine thread. Just sewing all that tatting on would have been a big task.

I very much regret that I did not make an attempt to contact her, especially if she was a local gal. Today I would have made the effort!
* * *
The Winter Olympics has started in Vancouver, Canada, and it’s ironic that they are having an unusually mild winter and desperately need snow! (I’d be happy to send them ours!!)
HAPPY VALENTINE'S DAY !!
Posted by Kathy Niklewicz at 4:35 PM 11 comments:

Pittsburgh wasn’t so lucky this time in avoiding the Feb 5-6 storm that pounded the mid-Atlantic states, and we’re not out of the woods yet, as more snow started falling again yesterday and today (Feb. 9-10). Because we’re retired we no longer have to struggle to get out to go to work, and we’re very thankful we haven’t lost power. We also share a plowing service with the neighbors to keep our driveways clear, and that has been a major blessing. There’s a photo at the end of this post which shows the depth of the snow last weekend.
I tried to keep my mind off the snowstorm on Saturday by working on Sherry’s excellent Treble Clef pattern on her Feb. 1 post at http://ladyshuttlemaker.blogspot.com
Motif #7 – Second Round
Sherry’s Treble Clef 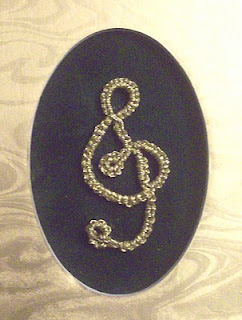 It took several attempts to work out the “folded ring”, which kind of forms the letter “D”. The idea is to get 5 knots in the ring to ‘fold over’ and to face the same direction as the outer edge of the ring

This is the first time I’ve ever heard of a ‘folded’ ring!
I’m VERY pleased with the way the heavier gold thread worked out - DMC’s size 5, which comes in a skein. 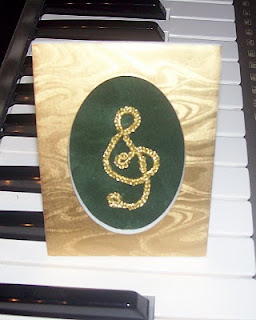 The clef (2” high) fits nicely into this little 4” x 3” frame from the dollar store.

These frames come in a 4-pack usually found with wedding items (in the larger stores).
This a VERY clever pattern, and my hat is off to Sherry for coming up with it! It almost looks as if it’s made with a continuous chain; but instead it’s constructed with rings and chains going in different directions than you would expect, without weaving over and under. Amazing 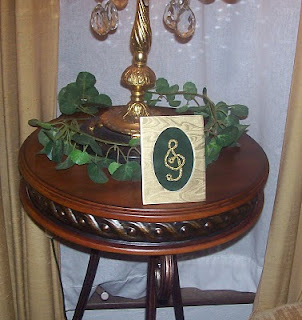 Here is the small table it will sit on, next to my piano. PERFECT

Thanks so much, Sherry! 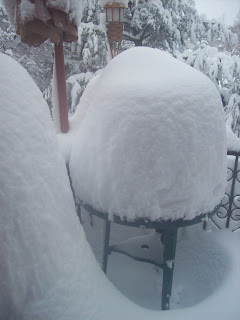 This is a table on our balcony after the snow finally stopped on the 6th. Total was about 21", although this looks deeper for some reason.
We keep pushing the snow off the balcony onto the back yard, and we have no idea when THAT snow will melt!
Posted by Kathy Niklewicz at 10:46 AM 5 comments: