Saga of the 'Layered' Snowflake 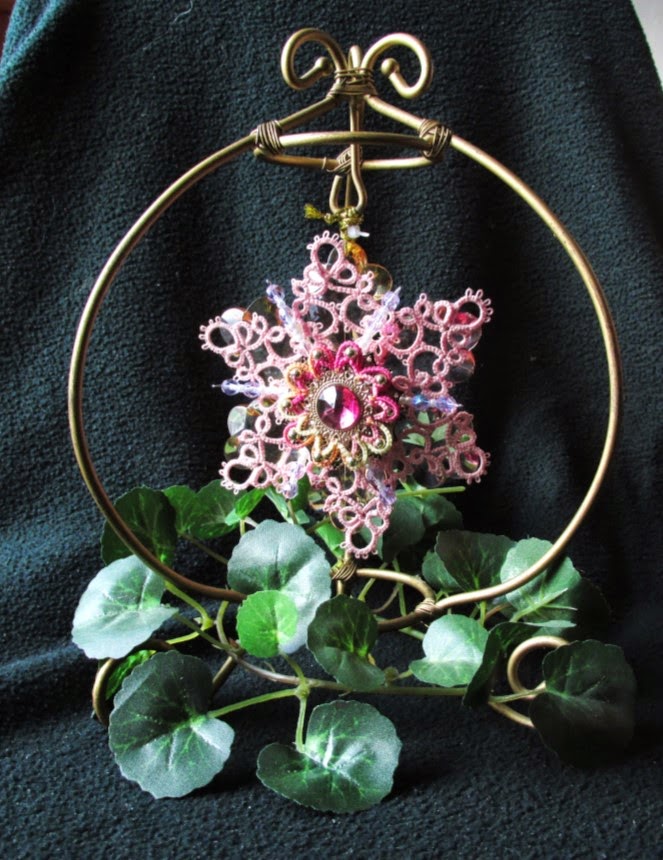 Here is the layered snowflake (from my prior post) in its brass holder, which displays it nicely.

This layered snowflake 'evolved' very slowly, from 2011 to 2014!  It definitely wasn't planned!


Each of the four parts has its own history.  It even surprised me when all the parts all came together in such a pleasing way! 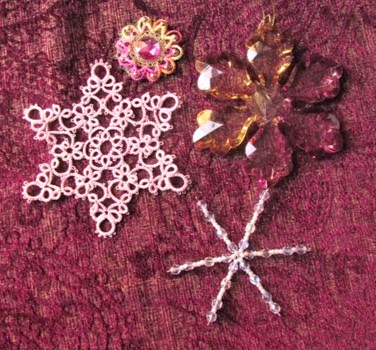 
I found the pattern back in 2011 and I tatted it right away, but then set it aside – for a couple of years!   I thought I'd just add my usual small gem to the center and a fancy bow on top.  But I'm now glad I waited until I got the 'layering' idea.


The second element is a small brass filigree medallion, formerly an earring with a sparkly pink gem in the center.  I experimented with this earring in 2012 by tatting two rows of chains around it in Lizbeth Tropical Punch (size 20) and adding some gold beads.  I was going to make it into a pendant, but I didn't follow through, and just set it aside.


The 'spoked' beaded snowflake goes back to 2010 from an acquaintance at a craft show.  I hung it in a window during the winter months, as it caught the light nicely; but I thought I might eventually add tatting to it.  I remember at one time pairing it up with the pink snowflake to see if I could put the two together in some way.  But I abandoned that idea – for a while!


The big acrylic (tinted) snowflake ornament is from Hobby Lobby, purchased in December 2013.
I simply liked its weight and size, and thought I might add some tatting to it.  It became the 'last piece' of the puzzle!


Bringing the elements together
The layering idea began around 2013 after I noticed that the thread colors in the medallion complemented the pink snowflake, and when I placed the medallion with the sparkly gem on top of the snowflake, they seemed perfect for each other!   But I again set them aside.  Then it took another while for me to realize that I could use the 'spoked' snowflake after all, by sandwiching it in between the other two elements.   Finally, I realized that big acrylic ornament seemed like a good way to give it some 'weight' and substance, and I wouldn't have to stiffen the snowflake.


But then it took more time  to figure out how to hold the parts together, and the solution was a dime-size piece of Velcro to hold the tatted snowflake securely to the acrylic ornament; and strong double-sided foam tape to hold the other elements to each other securely.  The tape is not noticeable at all.   The acrylic piece not only gives the ornament 'weight' but also makes it easy to hang and store.


All of a sudden it became a glitzy ornament similar to those you see on those fancy 'designer' trees, and it certainly fits the Victorian theme.   In my younger days, I'd probably have created several similar ones by now, but I seem to have run out of the ambition and 'drive' I used to have!


The ornament finally made its official debut in its present brass hanger at the Maple Festival in April 2014, and it's been to three more events since then.  It gets noticed right away! 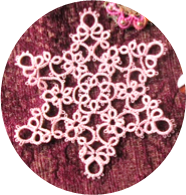 Here is the link to the snowflake pattern by Susan Schwenke:


I very much appreciated the diagram that is provided!


Even with the diagram, I found it a little 'tricky' to tat!  I don't often use two shuttles, and I had to go very slowly and make sure I was using the correct shuttle and going the right direction.  I remember also using color markers to highlight the diagram to help remember what shuttle to use!   It took longer to tat than I anticipated, and I had to really concentrate on it!   As I recall, I did it in sections over several days!


The middle of the lovely snowflake design is, unfortunately, 'hidden' by the medallion in the finished piece.  But at least I can show the whole snowflake here in my blog.


Here we are at the New Year already, and I hope that 2015 will bring all you wish for.


* * *
Blog note:   For those of you who may have tried 'enlarging' the photo in my last post, I have fixed it so that it now enlarges properly.  I apologize to anyone who had a problem with it.  I'm still learning things about my new laptop, including how to add photos to posts, which is a different procedure from that of my older laptop.
NOTE FROM Dec. 19, 2020:      Testing the new Blogger interface.  The world has also changed in a huge way.  I'm grateful we can have blogs that record our lives during all phases.  There are no craft shows this year, and Facebook has many new techniques from talented tatters around the world.