Golden Anniversary
Although the phrase “Something Old, Something New” is usually associated with weddings, it also describes my new Anniversary Keepsake that I recently put together after celebrating our milestone wedding anniversary this past January.    I have created keepsake bells for others but not as elaborate as this one!    I used various old and new items to assemble it.    I’m very pleased with the way this turned out 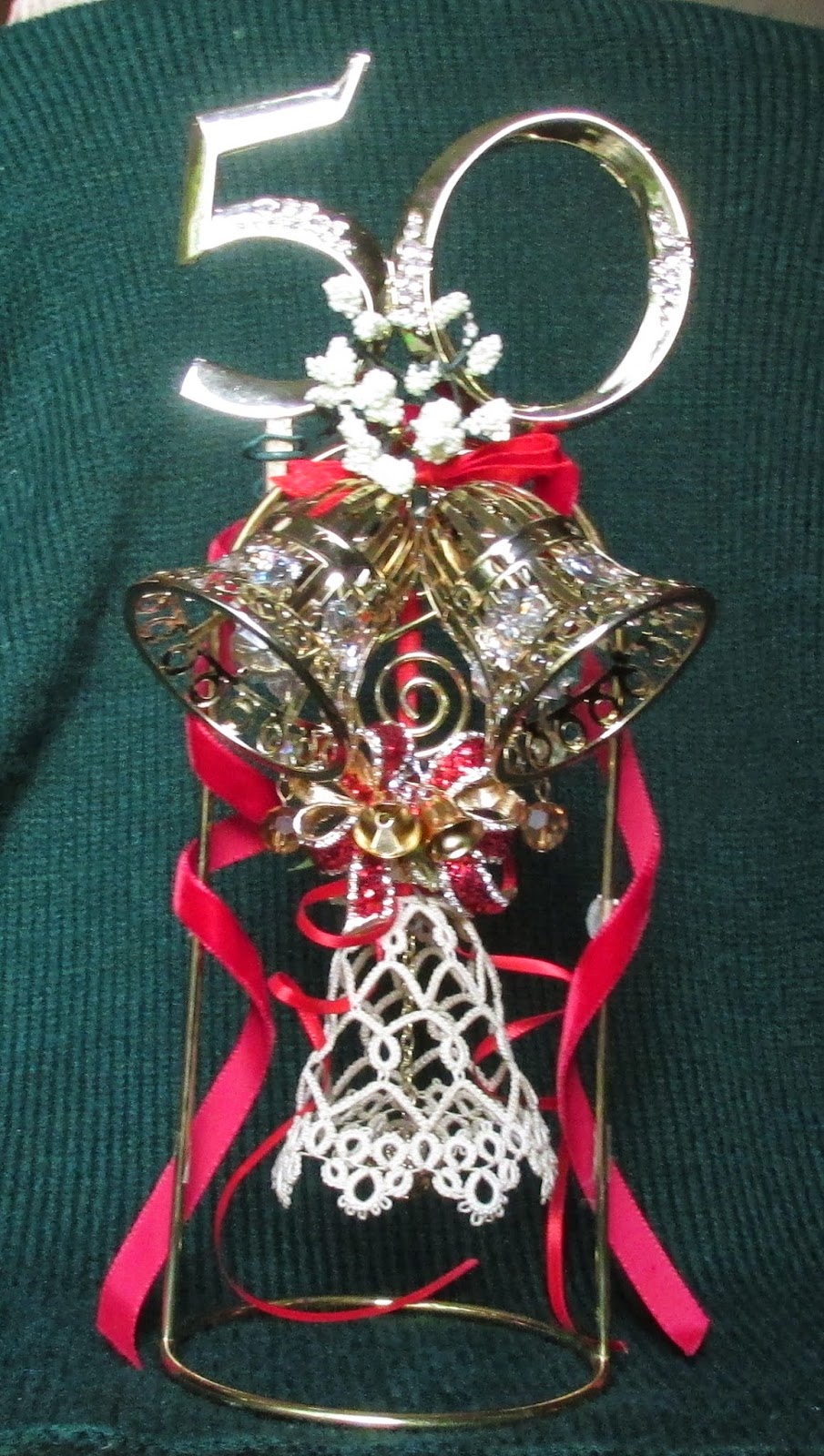 The finished display is about 12” high.

I’ve had the brass stand for a few years, and knew it would be perfect for attaching the various items, using wire or ribbon.

The ‘new items’ are

-  Numerals ’50’, which were included in a beautiful plant we
received from our brother- and sister-in-law 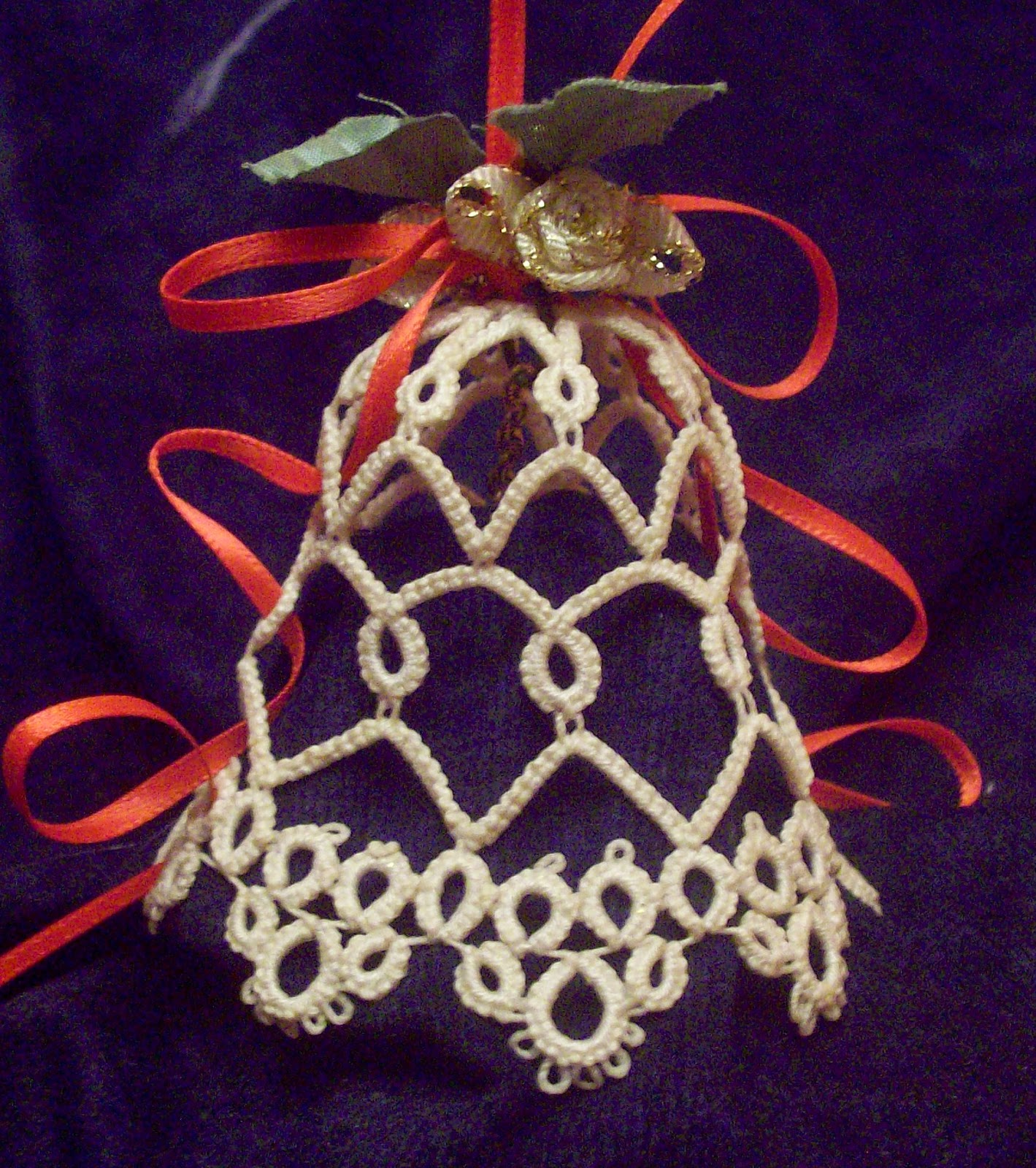 It was initially a ‘Christmas’ bell to hang on the tree, but it wasn’t long before I adopted it as my Anniversary bell, since the colors of my wedding were red and white.    It’s made with size 20 Cebelia

This is a close-up of my new sparkly bow pin (not attached to the
bell but only to the brass stand), which I wore to our anniversary dinner.   I can remove the pin from the stand  if I wish to wear it again.


I even sewed small gold bells onto the pin, which are from  “La Mode’ (buttons).  I thought they made a nice addition to it.


Celebration(s)
Below is the very elegant  restaurant we were taken to as a wonderful surprise by our brother- and sister-in-law  on our Special Day.   This restaurant  has quite a history, and it’s just as elegant inside!   As we had never been there before, it was a really special evening! 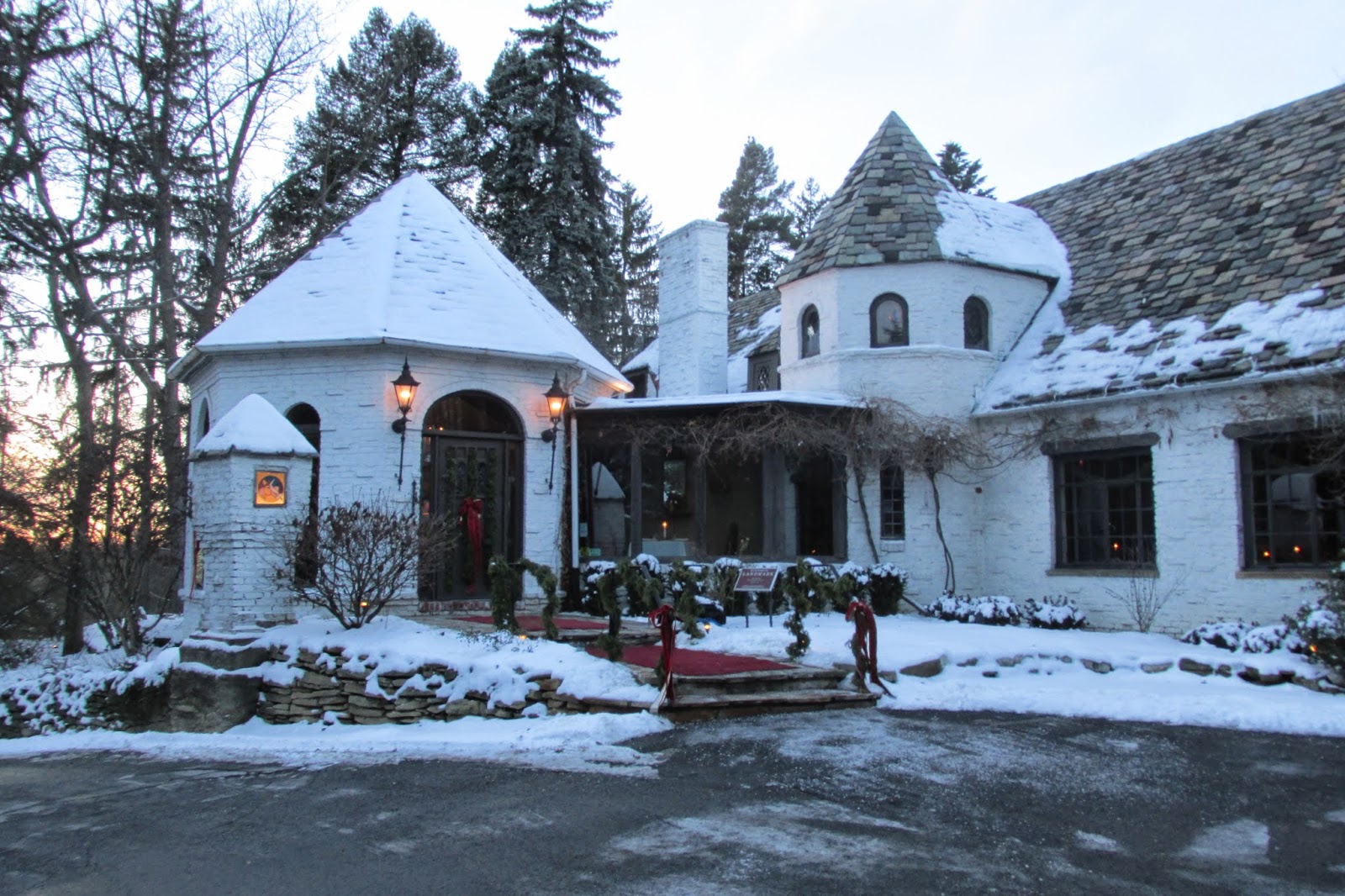 And the weather also cooperated!   In fact, it was similar to the weather on our wedding day in 1964 - a little overcast, and temps in the mid-40s, with some snow leftover from a few days before.  Our anniversaries have ranged from a balmy 60 F. down to 10 F.  On our 30th in 1994, we had to dig out 10” of snow so that DH could get to work !  As I was shoveling snow that day, I was just grateful that we didn’t have that kind of snowstorm on our wedding day!


This past November we had a low-key, informal celebration of our anniversary (exactly what we wanted) during the Thanksgiving weekend (hosted by the same brother- and sister-in-law), which was a planned get-together with family and several cousins whom we hadn’t seen for several years.   Our other sister-in-law (the one for whom I made the 25th anniversary ‘Mary Konior’ bell) surprised us with a beautiful 50th Anniversary sheet cake for dessert.

I’m very grateful that we have achieved this magic number, but I’m somewhat stunned at the ‘reality’ of it.  As everyone discovers as they get older, Time somehow speeds up!    It was only  ‘yesterday’ that we celebrated our 25th in 1989 - the year I learned to tat and quilt, and made the Victorian fan tree skirt, with my first tatted pieces on it (hens and chicks, of course, plus a straight line of rings!.  I was very proud of those!      (That year, we were also movie extras (ballroom dancers) in a made-for-TV movie, which is a whole other story!)


Then we buzzed past the 30th, 35th, 40th and 45th anniversaries, during which years I demonstrated tatting at many events (at least four a year).  (I started this blog between the 44th and 45th !)   And all of a sudden, our 50th was ‘around the corner’!     Lots of memories, mingled with all kinds of emotions!

The other reality is that it's been 40 years since we built our house, and somehow it has become all filled up with 'stuff', which we're now trying to deal with.  More memories and emotions!


*  *  *  *  *
Computer Update
I guess I could consider my recently purchased laptop as an Anniversary Gift, of sorts!   It’s very powerful and has a big 15.6” screen.  And – it’s RED – my favorite color, which is the main reason I chose it among the gazillion  models at the store!   Plus the price was right!   I’m now learning about Windows 8 and finally have the full Office again, including Publisher.  I’m hoping I can start blogging more often now!
This is my first post using it!