Both items have the same Small Motif pattern,  with doo-dad inserts.
Several months ago, I tatted two motifs based on Jane Eborall’s ‘Small Motif’ design, (see info below), but I substituted a doo-dad for Round One.


(These doo-dads - one silver and one gold - are plastic but are
nicely made and are smooth on both sides.)

I then put the motifs aside after tatting them, and I finally found places to show them off! 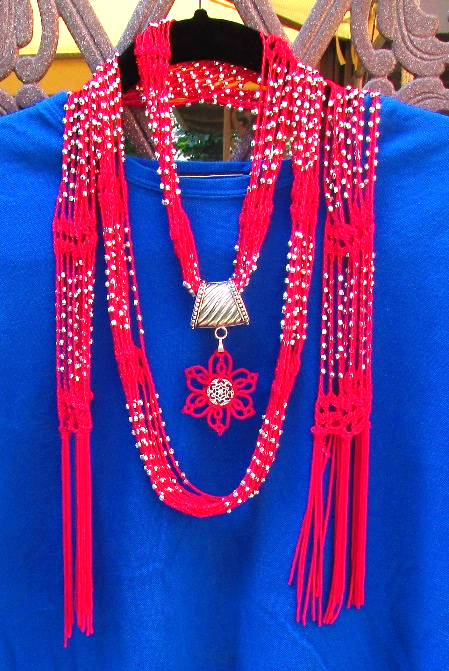 Fancy Scarf!!
How is this for a dramatic presentation of a tatted pendant?


I will be wearing this scarf to my hometown's Parade on the Fourth!  It’s made of ‘yarn’ fibers with lots of sparkly silver beads, plus fringed ends!
When I saw the scarf at Hobby Lobby, I knew it was the perfect showcase for my new pendant on my silver slider. 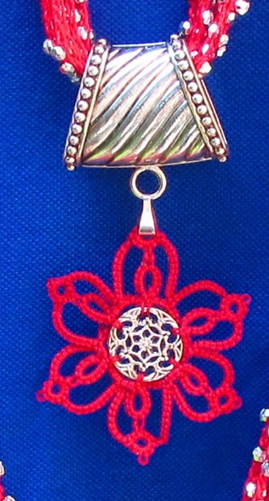 Finding the Motif
Several months ago I was looking for a 'quick' motif to tat so that I could start using up some doo-dads that I have, and it seemed that Jane’s “Small Motif” pattern was a good match.   I loved the 'petal' shape, and it had six sides to match the holes in the doo-dad.

The thread is Lizbeth Christmas Red, size 20 .  Unfortunately the doo-dad seems no longer to be available at Hobby Lobby   L

The doo-dad is substituted for the first round, but I had to figure out how to ‘encapsulate’ it (see figure below) and at the same time add six rings (mock rings in this case), ready for Jane’s second round

As many of you know, you can find Jane’s fabulous patterns and her exceptional drawings at http://janeeborall.blogspot.com/
Then look on the left sidebar for her ‘patterns and techniques’ pages.
The ‘Small Motif’ is found under ‘Motifs, Snowflakes and Doilies.’


Encapsulating the doo-dad
Substitute for first round) 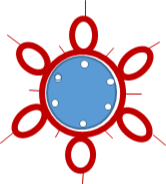 This is generally what the tatting around the doo-dad looks like.

Using only a shuttle and ball (not much thread needed on the shuttle), I inserted the hook into a hole in the doo-dad, then rather than a normal ring, I thought it would be easier to add a 'mock ring', which I did with a 6 – 6 chain  (joining the first and last stitches of the chain).

Then I did a chain of 3 vsp 3 to get to the next hole, and inserted the hook into that hole, and did another ‘mock ring’, then continued around, joining the final chain at the base of the first ‘mock ring’. Then I ‘cut and tied’!   Turns out this was all quite easy to do!  The knot count on the chains can be adjusted according to your tension.
Now I had the six 'rings' ready for the second round of Jane’s pattern !


The hooks on the Aerlit and Pop-A-Bobbin shuttles are just the right size for
getting through the hole in the doo-dad.
Of course, you can also use a very ‘fine’ crochet hook.

Second round
For the ‘flower petal’ round, two shuttles are required, and I simply followed Jane’s instructions, except I started by inserting the hook into the vsp between the mock rings and began with the long chain, rather than starting with a split ring.   (Jane’s pattern indicates climbing out from the first round; but of course, that wasn’t possible here.) 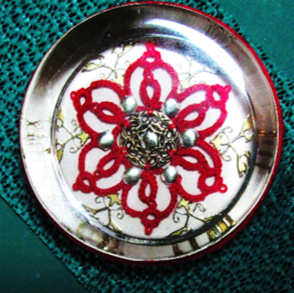 The second motif, with a gold center, is designated as another keepsake for our ‘Winter Wedding’ anniversary.

The motif, mounted on a white velvet paper disc, fits perfectly in this  paperweight without distortion, and is enhanced by gold accents. 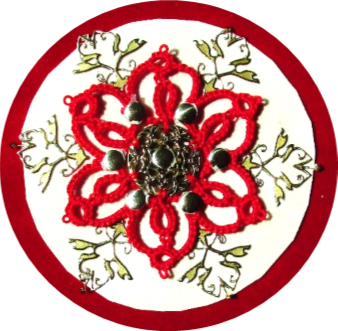 Here is the motif removed from the paperweight, so you can see the detail of the embellishments which I added from my scrapbook stash, as follows:
Flat adhesive gold ‘studs’,
and gold foil ‘corners’ to give the white velvet disc some added texture.
(The red circle is just the background for the photo.)
Margaret will appreciate my use of the gold stickers (we both love to use gold stickers on our cards)!  As you know, Margaret not only does beautiful tatting and other needlework,  but she’s also a very talented card maker, and you can see her blog at  http://margaretsdesignercards.blogspot.com/
She happens to be from England, and was born on the Fourth of July!!!
Happy Birthday, Margaret! 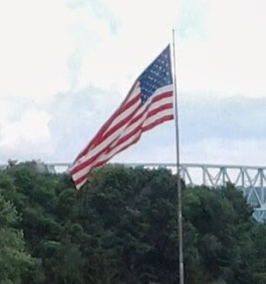 It’s great that for the USA’s Independence Day, I’ll be wearing a motif designed by Jane Eborall,  a 'very English' gal!
(I've learned that her sister, Sally, was also born on the 4th!)
Happily, the 'problems' of the 1700s
are long ago and far away!  Our ancestors would be astounded
at our modern conveniences, especially the internet,
which allows instant communications of ideas!
And wouldn't they marvel at airplane travel!
I’m also part English, by the way!  My great-great grandfather
was married in a magnificent church in London in 1847.  (Interestingly, newspaper announcements of the time state two different churches, so we're not sure which one it was!)    His son, my great-grandfather, came to West Springfield, Massachusetts in the 1870s and had six daughters and one son (!), who  was my mother’s father!  Sadly, I never met my grandfather, who  died in 1929, many years before I was born.    .
I hope those of you in the USA have a
great Holiday weekend!