Jazzy Slippers, Front-Side Tatting - and Visiting Replicas of the Nina and Pinta!

Jazzing up my slippers with Valdani Thread, Size 12
.
I was watching TV one evening, with my feet up on the hassock, and I noticed that my comfy slippers needed some pizzazz! 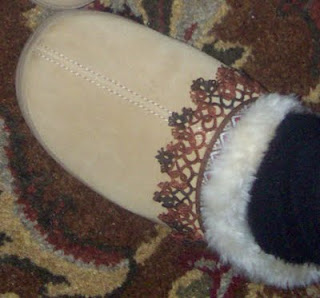 Of course, I immediately thought of the 1872 edging that I’ve been ‘obsessed’ with lately

I also remembered the Valdani thread I purchased recently at a cozy cross-stitch shop in our area.

Sadly, many cross-stitch shops have disappeared around here, so I’m happy this one is still in business.

Although I don’t do that much cross-stitching anymore, I do like to see what threads are in the shop apropos for tatting, and I found some Valdani. Somehow I’ve lost the label (can’t imagine how!), but I know it’s size 12, as I have another ball in another color. I see this thread is made in Romania.

I’m very pleased that the tatting looks quite natural on my slippers. I like the way it blends with the ribbon’s design that was on there. And yes, I did finish the second slipper! 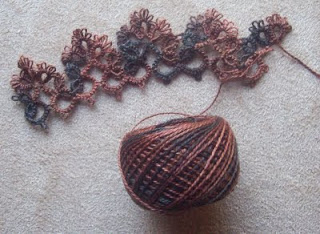 1872 Edging in Valdani Thread
Here’s the thread and the colorway.

I was so accustomed to the ease of working with Lizbeth thread that when I first started working with Valdani, it seemed ‘difficult’ to close rings, and to retro-tat. But then I relaxed my tension and it worked just fine, although I do try to avoid making mistakes, especially on rings!

It does have a nice, soft feel to it. However, it must be carefully ‘picked out’ to avoid fraying.


I’ve almost completed the Lizbeth Caribbean edging shown on in a recent post, and will unveil it soon, on a long-sleeve black jersey pullover.

Speaking of ‘Caribbean’ (notice the segue), here are two ships that plied the Caribbean sea back in 1492!
Replicas of Nina and Pinta visit Pittsburgh, PA 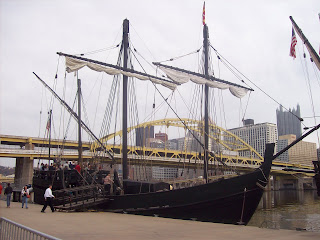 One of the joys of being retired is being able to visit attractions in the area on an off-day when parking is easy and lines are short!

These two replicas http://thenina.com/ are on tour around the world, and they happen to be in Pittsburgh from Nov. 7-15.

This was a really fun day for us! For the first time ever, we were able to take a walking tour of the revitalized North Shore of Pittsburgh, which has seen major changes during the past 20 years.

The replica ships are floating on the Allegheny River, but are very near the Ohio River, which is formed by the confluence of the Allegheny and Monongahela rivers, called “The Point” – the site of Ft. Pitt back in 1758..

In the vicinity are two major stadiums: Heinz Field, where the Super Bowl Steelers (and Pitt Panthers) play; and PNC Park (magnificent modern ball field of the Pirates). The recent Stanley Cup winners - the Penguins - play in an arena in the City itself, near the buildings in the distance. (I had to throw that in! Sports is BIG in Pittsburgh!) The yellow bridge is the Ft. Duquesne Bridge.

The Carnegie Science Center is also nearby, plus several new restaurants and office buildings. There are new bicycle and walking trails and beautiful landscaping along the river. We worked downtown for 25 years (1962-1987) and saw a lot of changes during that time; but it’s amazing to see how many more changes have taken place since then!
There are lots of memories for us in the City. In fact, my husband learned to fly a seaplane near this spot in the late '60s. Sadly, the seaplane base was damaged in the floods caused by Hurricane Agnes in 1972, and it is just a memory. He did obtain a land rating, but he missed the fun of landing on the rivers! The heritage of the city, however, will always be steel, even though most of the mills have shut down

Thoughts on Front-side Tatting
I'll end this post with thoughts about front-side tatting. I admit that I would have found the ‘front-side’ tatting concept difficult to have learned as a beginner. I had enough trouble as a new tatter (and even today!) remembering which direction I was heading on certain patterns, let alone the sequence of the stitches. And I wasn’t even aware until recently that there was such a concept as ‘down’ joins (another subject!) Tatting all looked fine to me, and I wasn't aware of a front or back side.

However, with the enlargements of photos on blogs, I can see how attractive tatting can look with all the knots facing forward.

One of the reasons I’ve been concentrating on the above 1872 pattern is to practice ‘right-side’ tatting on an easy ring-and-chain pattern, but which has enough variety to keep it interesting. I now can comfortably tat this pattern while riding in the car - not that I haven’t made mistakes! Occasionally, I forget to start the chain with the 2nd stitch (out of habit), but it’s becoming much more 'natural' now for me to reverse the stitch sequence (2nd stitch first) on chains.

Rings-only patterns, such as Hens and Chicks, are a little trickier, as you have to remember which ring is facing the 'front' side. And it's not easy for me to remember to start a ring using the 2nd stitch first.
Right-side tatting IS an admirable goal, and I will work toward trying to achieve it whenever I feel the pattern isn't too complicated.
Hope you all have a good weekend! I'm glad Thanksgiving is still two weeks away (here in the U.S.) I can't believe it's November already.
Posted by Kathy Niklewicz at 6:36 PM 11 comments: