I have been having computer and blog problems, so I have been delayed in posting my final 5 motifs for the second round of the 25. I'm going to try to get them all in within the next week or so by posting one or two at a time, to avoid complications. 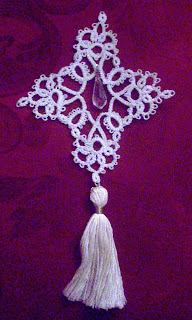 from the classic DMC "Tatting for Today" book (Motif #10 in the book, p. 11)
This motif goes back to my early days of tatting in the early '90s, and I look at it every day on our balcony sliding-door/window where it hangs as as a pretty suncatcher.
It is one of the few items I have tatted using size 10 thread, and it IS rather large, but definitely gets noticed. I stiffened it with Alene's fabric stiffener and added some glitter. It has been in the full 'western' sun in the afternoon for many years, and has suffered no ill effects.
I added the long 'crystal' bead and made the tassel (from embroidery floss).
It measures 8 inches from top of the star to bottom of the tassel. The star itself is about 4-1/2 inches long.

* * *
I enjoyed watching the Parade of Roses on New Year's Day. The dogs jumping into the water and 'water boarding' were SO CUTE!!

I did happen to notice, though, that there were very few if ANY majorettes in the parade. Having been one in my youth, I'm feeling sad about yet another tradition going away. I understand that majorettes are fast disappearing from school bands, and it makes me sad, as twirlng a baton was a huge part of my life, as were ballroom dancing - and being a secretary. I'm feeling more and more like a quaint old relic !!!
Posted by Kathy Niklewicz at 8:42 PM 11 comments: