'Angels We Have Heard on High' - plus Sharon's Merry Christmas Snowflake

On this Christmas Eve 2009, I am wishing everyone a wonderful holiday!
Below are some angels I made back in the early 1990’s.
Also below is my latest tatted piece – Sharon Briggs’ newly designed Merry Christmas Snowflake! (I'll count it as Motif #5 - Second Round.) 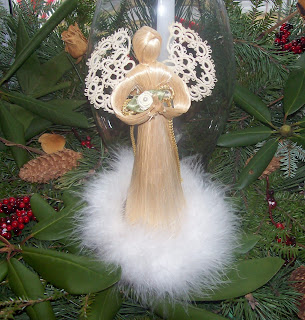 Straw angel forms were prevalent in the craft stores in the early ‘90s. I removed the straw wings and gave her tatted wings, which are two fans .
Unfortunately, I still can’t find the designer of the fan. It’s the same pattern I used for my 3-D heart, Feb.14 post. Possibly it’s Mary McCarthy's.
I also added maribou around the bottom of her skirt, which gives an added effect.
I used size 30 ecru thread, and stiffened the wings with Alene’s fabric stiffener

My Christmas card from 1993 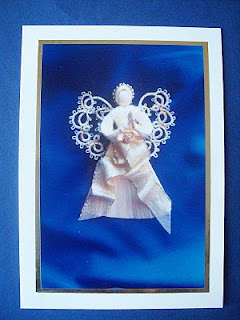 This is my Christmas card from 1993, on which I received many compliments.

The ‘model’ is a flat 4” straw angel, with the same fan (only one was needed).
I added the gold ribbon and flower, and some small gold beads around her head. I also used gold glitter on her wings, so that she sparkles on the tree!


The photo was taken with a 35 mm camera, with a macro lens borrowed from my brother-in-law. It was a very sophisticated piece of equipment back then! I mounted the photo onto a gold sheet, giving the effect of a gold border , and then attached it to white card stock. 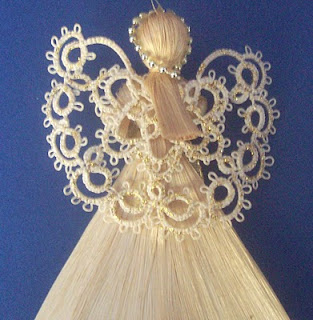 The back view of the angel (taken recently with my digital camera) shows the fan design.

I used a glue-gun (sparingly) to securely anchor the ‘wings’ to the body (under the ‘pony tail.)

Back when I had more energy and ambition, I not only made my cards (about 60) but addressed them in calligraphy. I no longer am that crazy! However, many of you actually send tatted snowflakes with your cards. Amazing! 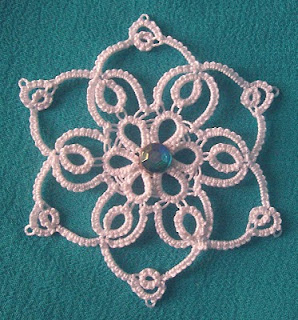 I think this is a sweet design – so elegant – and yet SO easy to tat. Sharon’s diagram is excellent. I finished tatting it within an hour.
I used only one shuttle and therefore didn’t do the split rings; but it worked fine for me. She gives you the option.
I used white Lizbeth thread, size 20. It doesn't even need to be stiffened!
And as you can see, I added a turquoise rhinestone in the middle (both sides). I love bling!


Sharon works overtime to bring us wonderful designs and tatting ideas, not to mention her tireless work on updating the 25-Motif Challenge Thanks so much, Sharon, for all that you do!

“The stockings were hung by the chimney with care, in hopes that St. Nicholas soon would be there!” (The Night Before Christmas – C. Moore)
Posted by Kathy Niklewicz at 10:50 AM 8 comments:

Collar from 1991 - Motif #4 (Second Round) - Plus Upcoming Christmas Festivals 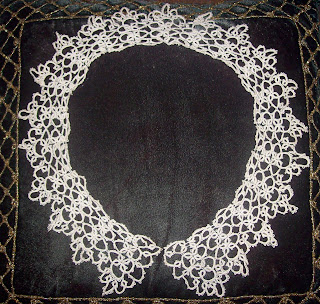 This collar was designed by Gloria Crowther from her book “Gloria’s Tatting”. It’s my widest piece of tatting, and is 23 inches longI remember as a ‘new’ tatter in 1991 that it seemed like an endless task to finish it. I kept holding my breath that I didn’t miss any picot connections. I also had to be careful when adding new thread on the shuttle.

However, It’s obvious that I never blocked it.

I believe it’s size 30 thread, although it could be size 50?. I’m amazed how I never wrote these details down anywhere, and I can’t always tell by looking at the item!

Various uses for the collar

I first wore the collar on a turquoise blouse for the christening of my niece back in 1991, and she is now 18!
Then over the years I’ve attached it to various costumes, or just displayed it on a table. One of my favorite costumes is shown below, and you’ll notice I attached the lace ‘collar’ to the fashionable ‘dropped’ waistband of the gown (front only) The Victorian pin on the gown was given to me several years ago by the very niece mentioned above! How sweet was that? 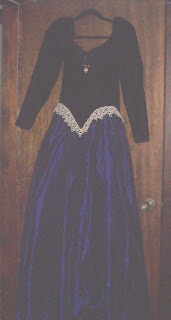 This beautiful gown was expertly hand made by some loving hands – possibly back in the 1980’s. I purchased it at a consignment shop around 2002, and I can only guess that it was made either for a stage production or for a bridesmaid – lucky girl – for a fall or winter wedding. – taffeta skirt and velvet top!
The gown is a timeless design, harkening back to the Victorian era, and I think it could very well garner ‘oohs and aahs’ today for a wedding, even though the strapless look is in fashion.
I’ve worn it a few times to our Christmas festivals, at both Vicary House and Old Economy, but this year I’ll be wearing another one of my favorite outfits, which I plan to show in my next post. It has lots of ‘sparkle’, as did many Edwardian evening dresses.

Two Christmas Festivals on Same Day
News Flash: Last festival for Old Economy?
Our tatting group has to be ‘divided up’ this year in order to attend two festivals, which, unfortunately, are scheduled on the same day (Saturday, Dec. 5). I will be attending the festival at Vicary Mansion in Freedom, PA, and Evelyn and Peg (Carol Lawecki’s mom) will attend the one at Old Economy in Ambridge.

The shocking local news story here is that the Old Economy historic village (circa 1824-1905) will be officially shut down beginning Jan. 2010 ! Incredibly, funding for the large site (17 historic buildings!) has been cut off by the Commonwealth of Pennsylvania. It’s certainly too complicated for me to go into here. Many other historic sites in the State have also been closed due to lack of funding.

Old Economy has been one of our main venues for demonstrating tatted lace. I’m not sure exactly when our group started there (sometime in the 1980’s?), as I didn’t join until October 1990 for their Fall festival. In future posts I intend to go into my complete tatting history (I know, I’ve been saying that forever!) and Old Economy was definitely a major site for us, as they always had several events during the year (spring, summer, fall, and Christmas). In the past few years, however, they’ve cut back on their events, although it was always open to the public as a museum and tour group destination. The last few years, even their Christmas event was cut back to just one day, rather than two days.

Rumors had been floating around about the complete closure of the site, but no one believed that would really happen – however, the official announcement was made on November 17. So we’ll have to see how this will all play out. It has sent a shock-wave through the community, and I’m sure there will be a campaign to rescue it.
My stint at Vicary Mansion will kick off the Holidays for me, and helps to get me in the mood for the season . Even though the weather indicates cold temperatures, snow doesn't seem to be on the horizon, which is good! Only the hale and hearty will venture out in snow!
In my next post I will share my story about visiting Elizabeth Zipay again at one of her shows in November!
Posted by Kathy Niklewicz at 9:03 AM 4 comments: