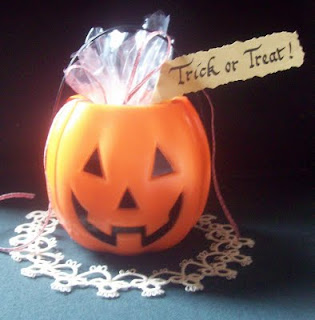 Could there be chocolate goodies inside this small jack o’ lantern (only 3” high) ? :-)

The tatted lace is a basic cloverleaf pattern, in size 30 thread.

In our area, the 'Trick or Treat' night was Thursday, the 29th, which is a good thing because today’s weather isn’t as nice as it was then!


POSSIBLE WORLD RECORD: FOUR TATTERS AT CAR CRUISE !
As I mentioned in my previous post, my husband and I attended a car cruise (Oct. 4) in our GTO, about an hour and a half away, at Kiski Area High School, which is attended by Carol Lawecki’s son and daughter. Her daughter (a senior) plays flute in the Band, which consistently wins competitions, and recently won 1st place at a recent interstate competition! I’m sure many of you are aware of Carol’s wonderful tatting and her blog ( http://caroltats.blogspot.com/ ) 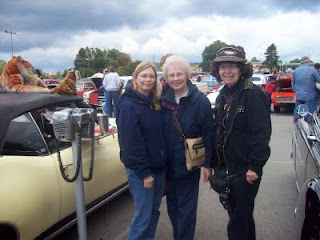 I met Peg 20 years ago. She was already a member of the Beaver County tatting group when I joined in 1990. Then I met Carol, who attends some of our events. Carol also started tatting in 1989, the same year I did, and, of course, was taught by her mom!

It’s so neat that Peg and Carol, as mother and daughter, share a love of tatting !

You might say the weather was a little ‘blustery’ that day! I’m wearing several layers of clothing, with my “GTO” jacket over top (described in my Sept. 17 post). Carol needed the hood she had on her jacket, and Peg was wearing earmuffs, which I wanted to borrow! We were fortunate, however, that it didn’t rain, even though it looked threatening at times, and it did warm up a little in the afternoon!
Car Quiz: Can you guess what is on the stand next to the
car in the above photo? See answer below ! 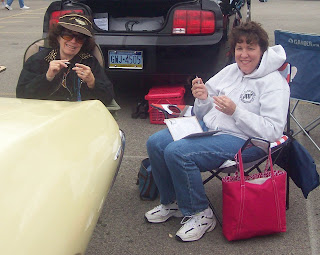 And here I am with Carol’s friend, Rayanna, and we are actually tatting – and chatting!

Rayanna is quite the Elvis fan, although she’s young! I love to talk about the 1950s, so we had fun discussing Elvis!

Carol taught Rayanna to tat not too long ago, and she is already doing split rings with size 80 thread! She finished a cute horse-shoe pattern, and I wish I had taken a photo of it. I didn’t get very far on my ‘Caribbean’ edging because I was talking too much. (Does that come as a surprise? !!!)


Rayanna and her husband also had a vehicle there, but she came over to sit with me!
Peg also sat with us, and we got to discuss our next December tatting event.

Carol’s Portable Tatting ‘Showcase’
Carol had to help out at one of the booths, so she couldn’t sit and tat. However, she did have a chance to show me her big notebook filled with samples of her wonderful tatted pieces, which is a good way to keep finished items safe and visible. Many are clever Jane Eborall designs. As you all know, Jane’s patterns of animals and sea creatures are very unique, and Carol executes them perfectly!
Also among Carol’s notebook of samples was her fabulous rendition of Pam Palmer’s famous elephant, adding her own colors! I can’t tell you how breathtaking it is to see in person, and it fills the entire 8-1/2 x 11 notebook sheet. You can see this fabulous elephant on her blog under http://caroltats.blogspot.com/2008_02_01_archive.html If you click on the photo at that post, you can see in detail all the sparkly things she added to it! It’s a masterpiece! 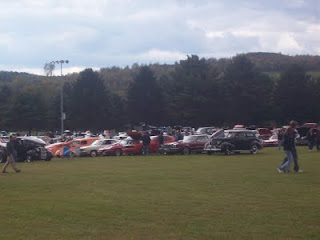 An overview of just a portion of the car cruise, which is a fund-raiser for the Band. 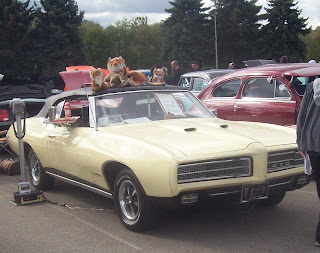 Here are the things we display with our GTO: tigers and goats on the roof (both symbols associated with Pontiac and GTO), and a vintage food tray, plus, the other item, which is the answer to the car quiz, below.

ANSWER TO CAR QUIZ: Drive-in-movie speakers! These speakers actually work, in that music can be played through them from the base below (and also are remote-controlled). Our cousin took the speaker-and-stand display that we had purchased awhile ago and turned it into a ‘working model’, by inserting a car radio/CD player in the base of the pole. (He also designed the base for this purpose.) It gets its power from our car battery during the shows, and it can be dismantled easily for transporting. Very clever, indeed, and it gets a lot of attention

I’m wondering how many of you out there remember these speakers at the drive-in movies! Do you recall how static-y they were – that is, if they even worked at all. There still are drive-in theaters around, and these days you just use your car radio, tuned into a certain frequency. 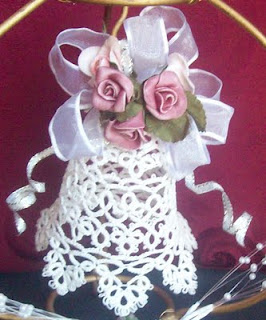 This is the ‘project in white thread’ I mentioned in my recent Sept 17 post where I featured the antique 1872 edging in Lizbeth Caribbean (see Motif #1, 2nd round)

I knew the edging would be perfect (with a modification) for the ‘lip’ of a bell.

Then I had to design the rest of the bell, and I’ve worked on it for the past several weeks I’m very pleased with the results! 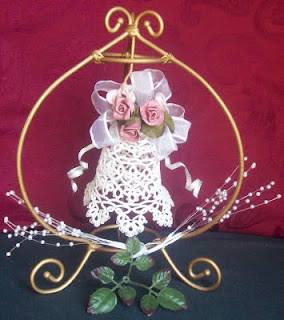 Photo of the bell in this special hanger, which I believe would look quite nice as a topper on a wedding cake! The hanger is 9” high. I can’t quite remember where I got it, though!

For more details about the tatting, see below.
I’m very happy about this bell, as it’s the first one I’ve created in 10 years! I use the term ‘create’ because the 'edges' I’ve used on the bells have been published patterns (usually vintage). My ‘creation’ is that of filling in the other areas with ring and chain combinations. The trick, of course, is to determine the sizes of the rings and chains, and to set up picot connections. 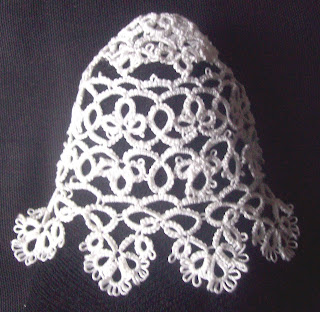 Here is the bell in its original state (not stiffened) with some fabric inside to better show the design.

I used #20 Cebelia, which I admit felt a little ‘rough’ after working with Lizbeth. Because it was going to be stiffened, I didn’t want to use my Lizbeth white thread; but then again, I’m not sure the ‘gauge’ would be the same.

I made a modification to the antique edge pattern, as I did not connect the small rings at the base of each ‘clover.

There are seven repeats of the edge pattern, and the rest of the bell is made to fit that number of repeats.
.
There are inconsistencies in this model, as I was trying various knot counts as I went along. Happily, I only had to re-do one section that wasn’t working out. Now I’ll have to tat another bell to test the pattern. (I sketched it out after the bell was completed. ) I also can see a 3-D egg shape forming here, so I hope to experiment with that idea, also!

Thanks to the 25-Motif Challenge, I’ve become motivated to more actively tat, and to think about making new things!

Experimenting with Lizbeth thread led to the search for an edging for a T-shirt., which then sparked this idea for the bell.

I’ll eventually show all my bells in my blog. However, I don’t have the ‘models’ for some of them - only photos – because I gave them as gifts. I did make sure to sketch out the patterns, but never remade them.
And even though I love the new color threads, I will always admire the classic white and ecru, as I have a particular fondness for Victorian items and vintage tatting. I especially enjoy decorating the items in 'Victorian' style – which represents a challenge in itself. Making bows and attaching them involves some patience! I usually add a crystal ‘ball’ clapper on a metal chain, but I didn’t want to take the time to do that before posting. That involves wire cutters and pliers!

Before ‘signing off’ I want to mention the following:

First – I was a happy winner recently of Sherry’s “Mondo Monday” Giveaways! http://ladyshuttlemaker.blogspot.com/ I’m sure many of you are aware of Sherry’s generous nature and her creative spirit! I was DELIGHTED to receive one skein each of her hand-dyed threads Treebeard #20, and Rio, #80 !!! I have several ideas in mind, and can’t wait to tat with these gorgeous threads! (BTW, I just noticed the Bead Spinner for this week’s giveaway (Part V). I have one and they are REALLY COOL!) Check it out!!

Second – I had the great pleasure of being with Carol Lawecki ( http://caroltats.blogspot.com/ ) , her Mom (from our Beaver County Tatters group) and Carol’s good friend, Rayanna (a new tatter, taught by Carol), at a recent CAR CRUISE at Carol’s local high school which her children attend. This was their 5th annual cruise, and it’s a fund raiser for the high school band – a great idea! They get a huge number of cars (over 700!) , and we were delighted to go there in our GTO for the first time (about 1-1/2 hours away). I’ll be sharing some photos and more of the story in my next post!

I can’t believe it’s October already! The beautiful, bright colored leaves are helping to ease the realization that winter is not far behind. We at least haven’t had snow yet in our area, although temps are definitely below normal! Hoping to still have a touch of Indian summer!
Posted by Kathy Niklewicz at 11:25 AM 7 comments: