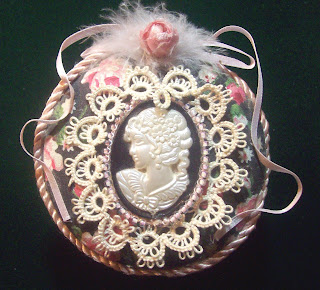 Boxes of this type would certainly make a nice Mother’s Day gift!

Back in the 1990s, during the early days of my tatting, I embellished these ready-made fabric boxes, which were available at craft stores.

Of course, as usually happens, the stores will only have these kinds of items for a few years, then they disappear. 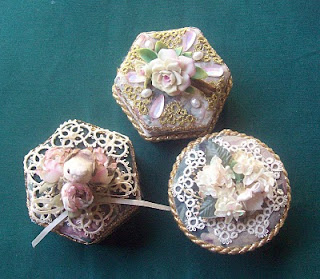 In addition to the tatting and trims on top, I often added cording or other trims on the sides

Although I gave several of these away as gifts, I kept a few for myself, and use them for jewelry.

I was disappointed when these boxes were no longer available in the craft stores, at least in our area.

I’ve always found it relaxing to tat Mary McCarthy’s butterfly, and I often tat it when riding in the car. I’ve slightly altered her pattern, and I’m enjoying now tatting it in variegated threads. I am also now making it front-side/back-side, as I like all the knots to face forward (especially in the size 20 thread) when only one side is visible, as in the bookmark below. 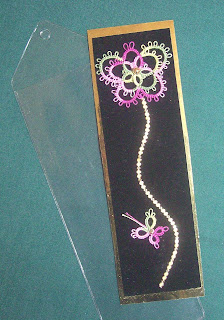 I like to put tatted motifs on bookmarks which I make with velvet paper mounted on card stock (in this case, metallic gold).

This is Lizbeth “Spring Garden”(size 20), which really ‘pops’ on a black background – similar to “Springtime”; (which has has blue in it).

The small butterfly was made from the thread that was leftover on the shuttle.

The curved line is a gold sticker.
I added adhesive gold half-beads in the centers of the butterflies.

I don’t mind using glue stick on my tatting, as it is easy to wash out later, if I wish to remove it.

When giving this kind of bookmark as a gift, it’s easy to write a note on the back of the cardstock. The sturdy plastic sleeve (barely seen in the photo) keeps the tatting protected, yet allows it to be easily removed to see the tatting clearly. I obtained this plastic sleeve at a specialty ‘stamp’ store in the area.

Packaging Hint: I have also discovered (in the candy section at the craft stores) some clear plastic ‘pretzel stick’ bags, which are a perfect size for protecting tatted bookmarks or displaying them for sale.

Update on Lady’s Slipper Pattern
I am slowly making progress on writing the pattern for the lady’s slipper (post of March 3). Various family and other events (including tatting-related ones) and normal chores are distracting me, plus the welcome arrival of some beautiful spring weather has beckoned me outdoors (there’s still a lot to do in the yard! .

I have started tatting a model of the slipper, and will photograph each ‘section’ as I go along. I’ve decided to use contrasting thread for each of the different ‘rounds’, so it will be clear (especially to me!) how it’s constructed.

I’ve also had to learn a new drawing software, and it's taken me some time to get comfortable with it.

I appreciate your patience while I work this through!

Recent Festivals
Here is a recap of our group’s two recent tatting events – the Maple Festival and the ‘reopening’ of Old Economy.

Maple Festival (Brady’s Run, Beaver, PA)
The weather for the Maple Festival (Apr. 10-11) was excellent, and there were thousands of visitors, as usual. There is always interest in our tatting,
Many young children also accompany their parents, and they enjoy looking at my dollhouse with Victorian furnishings (to be shown in the future). Evelyn, Peg (Carol Lawecki’s mom), and I were kept busy demonstrating and talking about tatting both days. I admit that I’m quite exhausted after these weekend events! Did I mention that Evelyn is 82? !!! She has more energy than I do!

Old Economy Village Reopening
And the Old Economy event the following weekend (Apr. 17-18) was also very successful. It was well advertised, and many people came by who had never visited the historic site before. We were honored to be invited to demonstrate tatting at this reopening event You can read more about Old Economy at this site: http://www.oldeconomyvillage.org/

Silk Exhibit
This was the first time we were in a large room on the first floor of the huge two-story Feast Hall/Museum, and we happily shared the space with three gals who had an excellent exhibit / demonstration of the silk manufacturing process, for which Old Economy became famous. The manufacture and weaving of silk at O.E. was developed by Gertrude Rapp (1808-1889), the granddaughter of George Rapp (1757-1847), The story of silk manufacture at Old Economy is absolutely fascinating, and their high-quality silk was prized around the world.

It is hoped that Old Economy Village will continue to be a major attraction, with volunteers working hard to preserve it.
* * *

Mother’s Day (in the United States) is celebrated this Sunday, May 9.
I wish a ‘Happy Mother’s Day’ to those of you who
have raised and are raising children!
You are to be applauded and recognized for all that you do!
Posted by Kathy Niklewicz at 11:58 AM 9 comments: